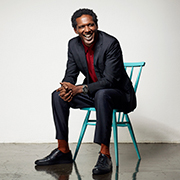 Award-winning poet and University of Manchester Chancellor, Lemn Sissay will be performing a selection of new and favourite poems from his recent Canongate collection, Gold from the Stone.

The Independent said, ‘his name is magic, his poems are songs on the street.’

Lemn Sissay is author of a series of books of poetry alongside articles, records, broadcasts, public art, commissions and plays. He was the first poet commissioned to write for London Olympics. His Landmark Poems are installed throughout Manchester and London. They can be seen in The Royal Festival Hall and The Olympic Park.

Having published his first book of poetry aged 21, he received an MBE from The Queen for services to literature in 2010.

Sissay became Chancellor at The University of Manchester in June 2015.

All proceeds from this event will be donated to the Lemn Sissay Foundation. The Foundation has been established to support the causes that are close to his heart: the arts, education, young people in care, care leavers and the people of Ethiopia.