Manchester Education Debates Series: Schools Policy: Where should the Labour Party go next? 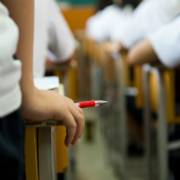 Coinciding with the Labour Party’s conference in Manchester, the Manchester Institute of Education is hosting a public debate on where the Party should be heading next on schools policy.

What should be the priorities for a future Labour government? How far should it go along with Gove-ian reforms on school structures, curriculum, exams, and the teaching profession? Are its emerging policies on freedom to innovate, local accountability, parent power, vocational education and re-professionalising teachers the right ones, or should there be a different or more radical agenda? Speakers: • Rt Hon David Blunkett MP • Mary Bousted, General Secretary of ATL and AMiE • Fiona Millar, journalist and education campaigner • Sheila Newman, Executive Member for Children’s Services, Manchester City Council

Come and have your say. The event is free and open to all.

Refreshments will be served from 4.30. Drinks reception afterwards.

This is part of the Manchester Education Debates series on schools policy: independent and free events designed to provide a space for people working in education to shape the political debate. Come and have your say, or submit a letter to the next education secretary via our website.