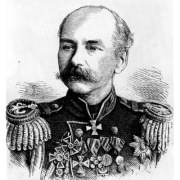 Gen. Konstantin von Kaufmann (1818-1882) used to be referred to by his contemporaries as the ‘creator of Russian Turkestan’ who’s first Governor-general he was from 1867 until 1881. As a conquering military commander Kaufmann shaped the very contours of Russian Central Asia before proceeding to laying the foundations for the government of this new Russian colony. This included heritage politics on a grand scale. Driven by a genuine interest and helped by access to ample funds, Kaufmann embarked on significant projects in areas as diverse as archaeology, museology, documentation, and photography. This talk proposes to conceive of Kaufmann’s far-reaching heritage politics as part of a ‘cultural technology’ of power characterised by the complex imbrication of colonialist knowledge, the arts and humanities, colonial power, and practices of remembering, which ultimately, through the process of selection/creation of what is deemed to constitute heritage, expresses prevailing concepts of nation and empire.