Moonbounce: Celebration of the 40th Anniversary of the Moon Landings 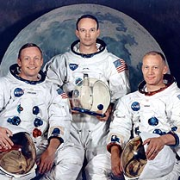 On 21st July 1969, Neil Armstrong and Buzz Aldrin became the first humans to walk on the Moon.

Join us on Sunday 19th July as we celebrate the 40th anniversary of the Moon landing with a day of talks and activities. During the afternoon we will be sending selected voice messages as radio transmissions to the Moon, bouncing them off its surface and catching their returning echoes with the Lovell Telescope - see below for how to enter our competition to send your own voice to the Moon!

The event begins at 12 noon and will include presentations by special guests, including:

•Professor Colin Pillinger: perhaps most famous for his work on the Beagle 2 mission to Mars, he also worked on the Apollo programme, and is now working on transferring Beagle technology to new missions to the Moon.

•Andrew Smith: author of "Moondust: In Search of the Men Who Fell to Earth", in which he interviewed all the remaining NASA astronauts who had walked on the Moon.

Other activities include discussion of Jodrell Bank's role in the Space Race from the people who were here at the time, special showings of archive video footage about the Moon landings, rocket workshops for kids and planetarium shows.

A barbeque will be available over lunch and during the afternoon. The cafe will also be serving cream teas and other refreshments.

The activities will conclude about 4pm.

Price: The admission charge for the day's events is 4 pounds for adults and 2 pounds for concessions. A barbeque will be available at an additional cost of 6 pounds per head. We recommend booking well in advance by telephoning our visitor centre on 01477 571339. The event is supported with funding from the Science and Technology Facilities Council as part of our Hot Spot Programme.