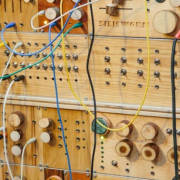 Join Owl Project as they discuss their latest work, following a residency at Manchester Museum, University of Manchester.

Consisting of Steve Symons, Simon Blackmore and Antony Hall, the artist collective will be in conversation to reveal how the residency has influenced, and inspired the direction of their latest creation.

In Rock Music, Owl Project will tune 5,000 years back in time to reclaim one of the oldest known creative processes: Flint Knapping. Making sharp tools from stone such as flint, or ‘Knapping’ is acknowledged as one of the earliest human processes. Following advice and guidance from archaeologists, the collective intend to closely examine the rhythms and movements associated with the practice of making stone tools.

Continuing Owl Projects interest in disrupting redundant processes with technology to create musical instruments, they will bring together experimental archaeologists and innovative electronic musicians in an attempt to couple the primal act of chipping rock from rock with the considered precision of synthesised music. Owl project are interested in how rhythms are the creators of forms and also one of the foundations of music. Previously they have explored making electronic music from early industrialized processes, including a traditional “Pole Lathe” and a “Jacquard Loom”. Their time at the Manchester Museum has made them reflect on older technologies and processes to create objects.

The talk will be a precursor to Flint Synth: a live performance in 2016 involving a recreational Flint Knapper. It will continue Owl Projects interest in combining the process of using redundant technologies with new technologies. The talk is free to attend. Please RSVP Bianca@invisibledust.com