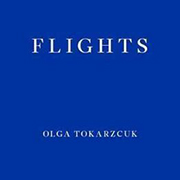 Waterstones Deansgate are delighted to host Olga Tokarczuk in Manchester for the publication of her novel, Flights. Join Olga in conversation with Kaye Mitchell, before she answers questions from the audience and signs copies of her book.

One of the most acclaimed Polish writers of her generation, Olga Tokarczuk has won multiple prizes, most recently for her novel THE BOOKS OF JACOB, which explores a formative moment in eighteenth-century Polish history in the idea of a Polish nation. FLIGHTS, which was also awarded Poland’s biggest literary prize (the Nike) in 2008, is a novel about human anatomy and travel in the twenty-first century. Both will be published by Fitzcarraldo Editions in Jennifer Croft's translations. On the occasion of the publication of FLIGHTS, Olga Tokarczuk is in conversation with Kaye Mitchell.

Olga Tokarczuk is one of Poland’s best and most beloved authors. In 2015 she received the Brueckepreis and the prestigious annual literary award from Poland’s Ministry of Culture and National Heritage, as well as Poland’s highest literary honour, the Nike, and the Nike Readers’ Prize. Tokarczuk also received a Nike in 2009 for FLIGHTS. She is the author of eight novels and two short story collections, and has been translated into a dozen languages.

Tickets are £3 redeemable off a copy of Flights, and include a complimentary glass of wine on arrival.

We look forward to seeing you there.