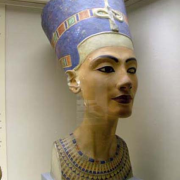 Joyce Tyldesley, The Manchester Museum/Biomedical Egyptology at The University of Manchester. For over a decade Nefertiti, wife of the 18th Dynasty pharaoh Akhenaten, was the most influential woman in the Bronze Age Mediterranean world. Suddenly she disappeared, vanishing as if she had never been. With the decoding of the hieroglyphic script at the beginning of the 19th century Nefertiti's name was restored to scholars but she remained a shadowy figure. A succession of egyptologists excavating at the Egyptian site of Amarna did much to reconstruct her story, but it was not until 1924, when a painted bust of Nefertiti was put on display in Berlin Museum, that the general public became aware of her existence. Western Europe, already experiencing a bout of Egypto-mania following the 1922 discovery of Tutankhamen's tomb, immediately hailed Nefertiti as one of the most beautiful and fascinating women of all time. This showcase lecture will consider the distorting effect that the Berlin head has had on the public perception of Nefertiti, before reviewing the archaeological evidence for her life and death.