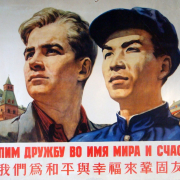 Both during the 1950s Sino-Soviet Friendship and again in the present era of apparent bonhomie between Presidents Xi Jinping and Vladimir Putin, formal ‘Friendship’ has been celebrated as the official tie between Beijing and Moscow, and thus between the states over which these leaders preside. However, like other interpersonal relationships which are metaphorically applied to states, ‘friendship’ is a bond which varies significantly between cultures, and so questions remain over whether Chinese and Russian leaders and populations understand their interstate friendship in the same way. An opportunity to assess each side’s notions of what friendship means, and how it is practiced, is offered by the fact that populations of the two countries are in constant interaction along the vast Sino-Russian border. This talk will therefore place a political examination of the state relationship into dialogue with an anthropological study of day-to-day relations among local people in northeast China and eastern Russia, a dual perspective which hopes to explore what interpersonal relationships might have to tell us about international ones and vice versa.

Biography: Ed Pulford is an anthropologist with research interests in the past and present of socialism, transnational and cross-border connections across Asia, and northeast Asian indigenous peoples. He completed his PhD in Anthropology at the University of Cambridge in 2017, and before joining Manchester in 2020 held postdoctoral research positions at Hokkaido University in Japan and the University of Amsterdam in the Netherlands. His first book Mirrorlands (Hurst, 2019) is an anthropological and historical account of life in the borderlands between China and Russia, narrated via a travelogue through the region.