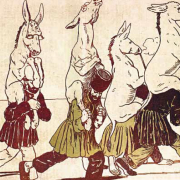 “A Particular Pluralism: The Caucasus, Satirically”

Molla Nasreddin was a satirical, Azerbaijani-language broadsheet that ran from 1905 to 1931, lampooning the powerful across some of the most politically precarious years of Russian empire and Soviet Leviathan. With subscribers across the Turkic world from Greece to China, some have considered it the most influential popular periodical of the Muslim world at the outset of the twentieth century. In this talk, I introduce the journal’s politics as one that long flourished in the Caucasus region—through a continual jousting with and besting of one’s neighbors, in violence and recovery, and then almost always resuming trade and social contacts anew. As the apogee of this intensely competitive cohabitation of peoples, languages, and religions in a compact world area, Molla Nasreddin was also its epitaph. By engaging the genre of satire and its parallel worldviews in the work of of Mikhail Bakhtin and others, I contend that this work offers a template for considering area studies boundaries both within anthropology and beyond.