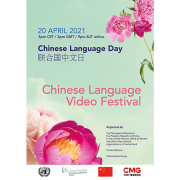 The event, organized by UNOG (the United Nations Office at Geneva), the Permanent Mission of China to the United Nations Office at Geneva and Other International Organizations in Switzerland, and CMG (China Media Group), is open to all foreigners worldwide interested in the Chinese language. Video submission opens from Thursday March 18 to Thursday April 15, 2021. As spring is in the air, everyone is looking forward to the end of the pandemic. The world is full of hopes for better times because its diverse civilisations share the same beauty. Participants are invited to submit original videos to showcase the beauty of Chinese calligraphy, Chinese poetry as well as Chinese culinary culture, by recalling their own stories or narrating any memories related to springtime. The result of the competition will be announced at a virtual event at 2pm GMT/3pm CET on Tuesday, April 20, this year's United Nations Chinese Language Day. The one-hour special programme, which showcases some of the best original video works, will be joined by international celebrities and well-known Chinese language influencers from around the world. It will be live-streamed across the social media platforms of CMG and the United Nations.

Winners of the competition will receive certificates issued by the United Nations Office at Geneva and CMG Europe. Five winners will be invited to visit the Palais des Nations of the United Nations Office at Geneva. The programme will offer successful candidates scholarships from one of the top Chinese universities and the opportunity to take part in its summer school project, as well as future work placement at CMG Europe. The date for the UN Chinese Language Day was selected to coincide with Guyu (Grain Rain), the sixth of twenty-four traditional Chinese solar terms. On this day, people pay tribute to Cangjie, a very important figure in ancient China and claimed to be the inventor of Chinese characters.

Email confucius@manchester.ac.uk for further information and how to apply.