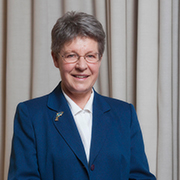 We’re absolutely thrilled to be welcoming Jocelyn Bell Burnell to Jodrell Bank for our first Lovell Lecture of the year. Best known for her discovery of pulsars in 1967, Jocelyn has become a role model for students and female scientists throughout the world and her ground-breaking observation is considered to be one of the greatest astronomical discoveries of the twentieth century.

For her February talk, she will discuss the origins of radio astronomy and the mysterious objects called quasars. Leading on from this, you’ll hear from Jocelyn about the discovery of pulsars fifty years ago. Finally she will summarise what we now understand about these amazing objects.

As a PhD student at Cambridge University, Professor Dame Bell Burnell was involved in opening up a new branch of astrophysics through her involvement in the discovery of pulsars. She is a well-known figure in the world of public understanding of science. She was patron of the IOP’s Einstein Year programme. In 2010 she was awarded the Royal Society Michael Faraday prize for excellence in communicating science. She has served as President of the Royal Astronomical Society, the Institute of Physics, the Royal Astronomical Society, and the Royal Society of Edinburgh and as Pro-Chancellor of the University of Dublin (Trinity College Dublin).