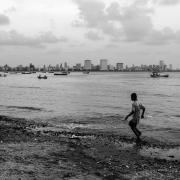 Photographer, screenwriter, filmmaker Sooni Taraporevala will present a series of black and white photographs depicting life in Bombay/Mumbai from 1976 to the present day. Capturing the city in which she grew up, Taraporevala’s images, cutting across class and community lines, are an insider’s affectionate view. The images, complex and intimate, quirky and quotidian, celebrate the odd and the everyday and are a significant contribution to the social history of one of India’s most diverse cities. Exploring a metropolis as its shape shifted over four decades, these works are personal documents of the city’s eccentrics, its children, its elderly, its landscape: a gentle mirror to culture and politics, with the secret sideways glance of a flaneur.

The display is guest-curated by Siddharth Dhanvant Shanghvi, for Sunaparanta, Goa Centre for the Arts, with patronage from Dattaraj & Dipti Salgaocar. Taraporevala's images are accompanied by a new text by essayist and travel writer Pico Iyer.

Taraporevala was born in 1957 in Bombay and left India when she was 18, to attend Harvard University on a scholarship. After securing a MA in Cinema Studies at New York University she returned home to work as a freelance photographer. The film for which she wrote her first screenplay, Salaam Bombay!, was nominated for an Oscar. This led her to write amongst others, Mississippi Masala, Such A Long Journey, Dr Babasaheb Ambedkar, The Namesake, as well as her directorial debut, the National Award winning Little Zizou. In 2000 she authored and published her photographs on the Parsi community, made over thirty years. The book PARSIS A Photographic Journey, was a critical and popular success and was reprinted in 2004. Her photographs have been shown at Institut Valencia d’Art Modern, Spain; Musee du Quai Branly, France; National Gallery of Modern Art, Delhi; the Tate Modern, and are held in the collections of the National Gallery of Modern Art, Delhi and the MET, New York. The recipient of many awards, in 2014, in recognition for her contribution to the arts, she was awarded a Padma Shri by the Government of India. Her current work includes directing a Virtual Reality short film and writing a series on a historical figure for television.

Siddharth Dhanvant Shanghvi is a novelist, photographer and curator. His debut novel, The Last Song of Dusk, won the Betty Trask Award (UK), the Premio Grinzane Cavour (Italy), and was nominated for the IMPAC Prize (Ireland). Shanghvi’s new novel, The Lost Flamingoes of Bombay, short-listed for the Man Asian Literary Prize 2008, was a number one bestseller. Currently based in Goa, where he serves as honorary director of Sunaparanta: Goa Center of the Arts, he has contributed to TIME, New York Times, ELLE, VOGUE and other publications. Artists shown under his curatorial watch in Goa include Roger Ballen, FN Souza, Dayanita Singh, Julian Opie among others.