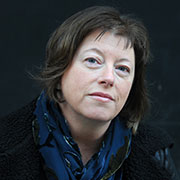 Vona Groarke's first collection was Shale, published in 1994. The most recent was X, a PBS Recommendation for Spring 2014, reviewed by the New Statesman as 'an outstanding collection by a poet at the height of her powers'. Selected Poems marks an important milestone in the career of a poet described by Poetry Ireland Review as 'among the best Irish poets writing today', and will feature poems from each of her six award-winning collections to date. She teaches at the Centre for New Writing at the University of Manchester.

Adam Thorpe was born in Paris in 1956. He is the author of ten novels, two collections of stories, six books of poetry and a work of non-fiction, as well as a stage play performed almost entirely in Berkshire dialect, many radio plays and broadcasts, including two BBC documentaries, and numerous reviews for major newspapers and journals.

His first novel, Ulverton (1992), now a Vintage Classic, received the Winifred Holtby Memorial Prize. His latest novel, Flight (Cape, 2012), moves into Conradian territory with the story of a freight pilot abandoning a dubious arms deal and finding himself pursued by ruthless predators. Thorpe’s first foray into non-fiction, On Silbury Hill (Little Toller, 2014), was chosen as Radio 4’s Book of the Week and has gone into multiple printings.