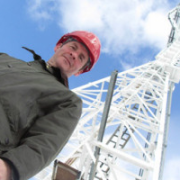 In an episode due to be aired at 9pm on Thursday 11 June, he pays a visit to the iconic telescope – designed and built by Sir Bernard Lovell – at the famous University of Manchester facility.

Focusing on the 1950s, the episode shows Barrie – known affectionately to millions of Red Dwarf fans as ‘Rimmer’ - taking a walk inside the huge dish.

More details and a brief clip of Barrie at Jodrell Bank can be found at http://www.jodrellbank.manchester.ac.uk/news/2009/machines/