CRES Seminar: The Anatomy of the Russian Elite 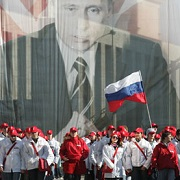 All are welcome to attend the next Cross-Disciplinary Russian and Eurasian Studies Network (CRES) Research Seminar with Professor Peter Rutland (Leverhulme Visiting Professor, University of Manchester/ Wesleyan University, US).

THE ANATOMY OF THE RUSSIAN ELITE

Vladimir Putin is a strong leader who has restored the authority of the Russian state, but the elites through which he rules Russia are deeply divided. The elite consists of Putin’s inner circle, the security bloc, the oligarchs, and the state bureaucrats. There are few institutional mechanisms for resolving elite differences, and the ideologies which they deploy (modernization, nationalism) are contradictory and shallow. This paper analyzes the capacity of this system to respond to the challenges facing Russia, and its prospects for long-term stability.

Peter Rutland, Professor of Government at Wesleyan University, US, was awarded the prestigious Leverhulme Visiting Professorship at Manchester for 2016. He authored two books, The Politics of Economic Stagnation in the Soviet Union (Cambridge University Press, 1992) and The Myth of the Plan: Lessons of Soviet Planning Experience (Hutchinson, 1985), alongside with many other publications. He also edited Business and the State in Contemporary Russia (Westview Press, 2000). Since 2013 he has been editor in chief of Nationalities Papers, the journal of the Association for the Study of Nationalities, and an associate editor of Russian Review. He blogs about nationalism around the world at Nationalism Watch.