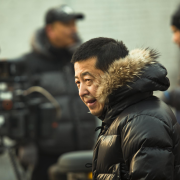 In 2009, the famous independent Chinese filmmaker Jia Zhangke withdrew his films from the Melbourne International Film Festival in protest at the invitation to Rebiya Kadeer, the leader of the separatist Uighurs of Xinjiang Province, to the festival.

Robert Hamilton of Manchester Metropolitan University will explore the complex reasons for this extraordinary event and the consequences of this on Chinese cinema, history and politics.