Jeanette Winterson “in Conversation” with Mark Billingham and Val McDermid 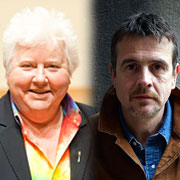 Professor of Creative Writing Jeanette Winterson will be joined in conversation by crime novelists Mark Billingham and Val McDermid.

Mark Billingham was born and brought up in Birmingham. Having worked for some years as an actor and more recently as a TV writer and stand-up comedian his first crime novel was published in 2001. The last few years have seen Mark Billingham go from strength to strength: he is eleven books into the bestselling Tom Thorne series and the author of two bestselling stand-alones, In The Dark and Rush of Blood.

An acclaimed television series based on Sleepyhead and Scaredy Cat, the first two novels in Mark’s acclaimed Tom Thorne series was screened on Sky TV in 2011, starring David Morrissey as Tom Thorne. Adaptations of both In The Dark and Rush Of Blood are currently in development at the BBC.

Val McDermid was born and schooled on the east coast of Scotland and then Oxford University after which she became a journalist. Her first book, Report for Murder was published in 1987 and since then she has gone on to have 25 more books published, which have been translated into 30 languages, and have sold over 10 million copies worldwide and well over 1 million in the UK. Val McDermid is one of the biggest names in UK crime writing. She has won many awards internationally, including the CWA Gold Dagger for best crime novel of the year and the LA Times Book of the Year Award. She was inducted into the ITV3 Crime Thriller Awards Hall of Fame in 2009.