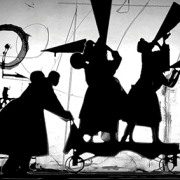 South African artist William Kentridge weaves together global histories of revolution, exile and utopian aspirations, exploring how they are shaped by the creative forces of memory and the imagination.

William Kentridge (b.1955, Johannesburg) is renowned for his animated drawings and films that have been exhibited throughout the world since the 1980s. Rooted in his experience of apartheid and post-apartheid South Africa, they propose time and history as fictional concepts, open to change and re-imagination.

This major touring exhibition focuses on Kentridge’s large-scale film installations including O Sentimental Machine (2015) and Refusal of Time (2012), an immersive work exploring the technology of time-keeping and string theory, created in dialogue with physicist Peter Galison. A display of new and recent tapestries, works on paper and artist books will accompany the film projections, presented within an environment designed by Kentridge’s long-term collaborator Sabine Theunissen.

Combining drawing, tapestry, music and film projection as well as sculpture, this major touring exhibition draws on sources as broad as early cinema, China’s Cultural Revolution, opera, scientific theories of time and space and the generative qualities of nature and creativity.

The exhibition is accompanied by three limited-edition silkscreen prints by Kentridge, available for sale from the Whitworth shop and an illustrated exhibition catalogue with new writing by Iwona Blazwick, Homi Bhabha, Sabine Breitweisser, Michael Juul Holm and Denise Wendel-Poray.