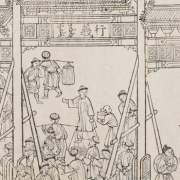 This online talk coincides with the exhibition "Qing: China's multilingual empire" at The John Rylands Research Institute and Library from 21 October to 13 March

Dr. Johannes Lotze, post-doctoral fellow at the Hebrew University of Jerusalem will be introducing Qing-dynasty books that reflect the diversity of the empire, revealing global connections made through trade, diplomacy, and exchange.

This online talk has a twofold purpose. First, it will provide an overall introduction to the Chinese items of the John Rylands Library (JRL) and the Manchester Digital Collections (MDC). It marks the launch of the exhibition “Qing: China’s Multilingual Empire” at the JRL (curated by Johannes Lotze and Julianne Simpson) which explores the internal diversity and global connectedness of the Qing empire (1636-1912).

Second, the talk uses this introduction as a springboard to a topic that can be summarised as “Multilingual China”: the significance of diverse languages and scripts in the medieval and early modern sinophone sphere. The focus will be on specific JRL items that illustrate the role of multilingualism, translation, and language learning in imperial China (and especially the Qing as its final incarnation), such as bilingual glossaries, multilingual inscriptions, and depictions of everyday life.

Biography: Dr. Johannes Lotze is a post-doctoral fellow at the Hebrew University of Jerusalem. He received his Ph.D. from the University of Manchester in 2017 and has been a Teaching Fellow in Medieval Chinese History at the University of Birmingham from 2018 to 2020. Johannes is a historian of East Asia with a focus on the nature and impact of ‘non-Chinese’ empires in ‘China’ and on sedentary/nomadic cooperation and conflict. In particular, he investigates the history of linguistic landscapes and language policies in Chinese empires against the backdrop of wider global trajectories of multilingualism and translation.