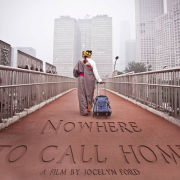 Nowhere to Call Home, a film by Jocelyn Ford (in Tibetan, Chinese and English, with English and Chinese subtitles)

Don't miss the UK premiere of this globally acclaimed film! All are invited to the screening and director Q&A afterwards.

BACKGROUND Nowhere To Call Home tells the powerful story of Zanta, a Tibetan woman who moved to Beijing against the wishes of her in-laws so that her young son can get an education. The New York Times in an article titled "Inspiring Dialogue, Not Dissent, in China," wrote: "The film breaks down the sometimes romantic Shangri-La view that Westerners have of Tibet ... and offers a shocking portrait of the outright racism ... Tibetans face in Chinese parts of the country."

In August the documentary premiered in the U.S. at MoMA, and in the autumn Nowhere To Call Home premiered in China as the inaugural film at the opening of the Center for Documentary Studies in Beijing. It has been garnering an extraordinary track record of acclaim from both Tibetans and Han Chinese in the PRC, with a leading anthropologist describing the film as "very important for inspiring our imagination on modern China's transformation."

SYNOPSIS Widowed at 28, Tibetan farmer Zanta defies her tyrannical father-in-law and after her husband's death refuses to marry the family's only surviving son. When Zanta's in-laws won't let her seven-year-old go to school, she flees her village and heads to Beijing where she becomes a street vendor. Destitute and embattled by discrimination, Zanta inveigles a foreign customer into helping pay her boy's school fees. On a New Year's trip back to her village, Zanta's in-laws take her son hostage, drawing the unwitting American into the violent family feud. The two women forge a partnership to try to out-manoeuver the in-laws, who according to tradition get the final say on their grandson.

Biography: Jocelyn Ford, former Beijing and Tokyo bureau chief for the U.S. public radio show "Marketplace," has been based in East Asia for three decades. Her groundbreaking reporting on "comfort women" in the 1990s was a catalyst for raising awareness about World War II abuses of women by Japan's military. During three years of filming Nowhere To Call Home, Jocelyn overcame restrictions on access to Tibetan communities to shine light on the complex choices facing Tibetan farmers living in contemporary China, and to lend new insights into the social fragility of the world's fastest rising power.