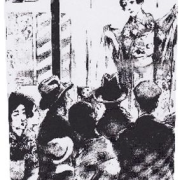 During the interwar years in Japan the department store, like the cinema, was a vital part of the mobile spectacle of modernity. Both were dream-worlds (Walter Benjamin) of visual consumption and urban flâneuring, real or imaginary. Both encouraged new modes of perception and experience that would have important effects on gender and subjectivity. My talk will trace the thick intertextual connections between silent era film actresses such as Irie Takako (1911-1995) and the equally glamorous department store fashion models called mannequin girls. I am interested in the tension between their visual objectification and commodification and the degree of independence and mobility they possessed as quintessential modern girls. Like the film star, the mannequin girl was a privileged object of male fantasy and projection but also a figure of the greatest ambivalence. She could perform demure femininity, but could also undermine it. While a male-dominated media attempted to fix her into a primarily visual economy and discussed breathlessly her legs, her doll-like passivity and her artificiality, what the mannequin girl herself did and said presents her as an active and autonomous subject, a politically conscious urban worker.