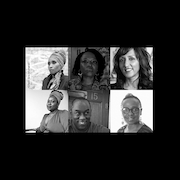 This event is part of a tripartite University Initiative celebrating the 75th anniversary of the fifth Pan-African Congress that took place in Manchester in October 1945.

Location: Online, details to join will be sent to registered guests.

As part of the Pan African Congress Anniversary celebrations, creative writers from Manchester will be providing a series of conversations and readings, addressing themes of home, race, postcoloniality and citizenship. These presentations will be made available as recordings, and will engage with contemporary issues of race and belonging, particularly in the wake of current debates around BLM and the killing of George Floyd. Writers will explore narratives of identity as they pertain to the Pan African Congress and its history, and discuss their own work and artistic trajectories. Participants include Alex Wheatle, Anjum Malik, Malika Booker and Jeniffer Makumbi-Morris, Ellah Wakatama and Zodwa Nyoni.

Ellah Waktama is a Senior Research Fellow at the University of Manchester. She is also chair of the Caine Prize for African writing, and served on the judging panel of the 2017 Dublin International Literary Award as well as the 2015 Man Booker Prize. In 2011 she was awarded an OBE for services to the publishing industry, and in 2019 was appointed as an Honorary Fellow of the Royal Society of Literature.

Alex Wheatle is an author of children’s and adult fiction. His novel young adult novel Liccle Bit (2015) was awarded the Carnegie Medal in 2016, white Crongton Knights (2016) won the Guardian Children’s Fiction Prize. In 2008 he was awarded an MBE for services to literature.

Anjum Malik has written extensively for screen, stage and radio. Her original radio drama The Interpreter was featured on BBC’s Woman’s Hour. Her most recent radio work is Napoleon Rising, an adaptation of an unperformed Anthony Burgess play, and has also written for Doctors, Silver Street and Coronation Street.

Malika Booker's debut collection Pepper Seed was longlisted for the OCM Bocas prize (2014) and shortlisted for the Seamus Heaney Centre prize for first full collection (2014). Her poem ‘Nine Nights’ was shortlisted for the Forward Prize for Best Single poem in 2017. In 2019 she was awarded a prestigious Society of Authors Cholmondley Award for her contribution to poetry.

Dr Muzna Rahman is a lecturer in postcolonial writing at Manchester Metropolitan University’s English department. She previously worked in the development sector in Bangladesh, and as a lecturer in English and American literature at the University of Lincoln. Muzna is interested in representations of food and hunger in literature and film, and the interdisciplinary potential contained within examining food, eating and hunger across a broad range of academic fields. She is also interested in eco-critical perspectives, with a focus on literature and climate change. Her book 'Hunger and Postcolonial Writing' will be published by Routledge next year.