Work and Equalities Institute Fourth Annual Lecture: Can workers be organised if the state isn’t? Digitalisation, work and employment in emerging and developing economies 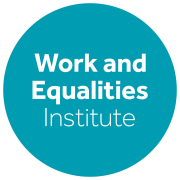 Informed by the recently renewed research interest in the role of the state and governance theory, and drawing on empirical evidence of recent development in the emerging and developing economy context, this presentation explores the role of the state as a key institutional actor in shaping the adoption of digital technology at macro and micro levels, with implications for work, employment and human resource management across different sectors and segments of workforce. It examines the role of the state in promoting the adoption of digital technology in businesses on the one hand, and how its social policy may impact firms’ decision in their automation and labour strategy on the other, with broader and, in some cases, significant social implications in the longer term.

While not advocating statism, this presentation calls for more research attention to develop a more nuanced understanding of the diverse roles of the state at various levels and across business sectors in the light of its strategic goals and capability. It also highlights the need for state intervention in regulating new forms of labour strategy, such as that found in the digital platform economy in China.

Biography: Dr Fang Lee Cooke is Distinguished Professor at the Faculty of Business and Economics, Monash University, Melbourne, Australia. She is a Fellow of Academy of the Social Sciences in Australia. Prior to joining Monash University, Dr Cooke was a full professor at Manchester Business School at the University of Manchester (since 2005) in the United Kingdom. She has also held positions at RMIT (Deputy Head of School of Management), Melbourne and Sun Yat-sen University, Guangzhou, China