Stand up comedy with Kelly J Roberts and guests 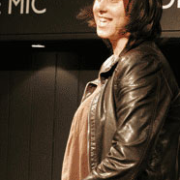 Got an hour to spare? Fancy laughing so much your face will ache? Then start your weekend early and get down to this event! Full of fun and antics featuring Kelly J Roberts as your compere, with comedy from Kooky Babooshka, Tim Bradbury and headline act Lewis Costello. Seventeen year old stand-up comic Lewis Costello is Ed Byrne’s support act and a writer on Russell Howard’s Good News. He left his year long tenure on BBC Radio Lancashire to focus on stand-up and after gigging with comedy legends from Johnny Vegas and Brendon Burns to Simon Munnery and Mark Steel, he began touring his first solo show, 'Neapolitan Ice Cream', calling in at the Edinburgh Fringe and the Latitude Festival. Music from Flux Ache.