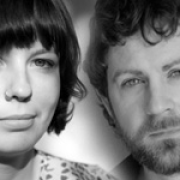 Literature Live is presented by the University's Centre for New Writing.

Centre for New Writing graduate Jenn Ashworth's debut novel A Kind of Intimacy was published by Arcadia in 2009. A Kind of Intimacy was included in the Waterstone’s New Voices promotion, won a Betty Trask award from the Society of Authors and was short-listed for The Guardian's "Not The Booker Prize". Her second novel, Cold Light will be published by Sceptre in May 2011. Jenn Ashworth was recently recognised by the BBC's "The Culture Show" as one of the twelve best new novelists in the UK.

Paul Batchelor's debut collection of poems The Sinking Road was published by Bloodaxe in 2008 and shortlisted for the Jerwood-Aldeburgh Prize and the Glen Dimplex First Collection Prize. His poems have also appeared in Poetry London, Poetry Review and the Times Literary Supplement.

This event will be followed by a Q & A session.