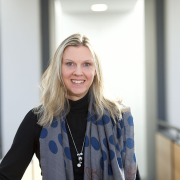 In 1998 two teams of astronomers discovered that the expansion of the Universe is accelerating, work that was awarded the Nobel Prize for physics in 2011. The discovery was based on careful measurements of supernovae, and implies that something, often called “Dark Energy”, is pushing the universe apart.

In this talk professor Isobel Hook will describe the work that led to the discovery of the accelerating expansion of the Universe, and the major projects that have taken place since then to improve, understand and explain the results. Finally she will discuss the exciting prospects for the future of supernova cosmology as new telescopes, which are being planned and constructed now, come into operation.

Tickets are just £8/£6 and, as ever, annual pass holders are entitled to 10% discount.