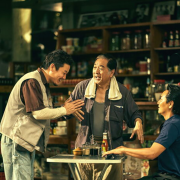 Li and his family live in northern Thailand. When his daughter is assaulted, he is set on a trajectory that will bring him into an intense conflict with the local police and test his ability to always do what’s best for his family. Based on the Indian Malayalam-language film Drishyam, Sheep without a Shepherd is that rare example of a remake that manages to become its own film.