Merchants of Print: from Venice to Manchester 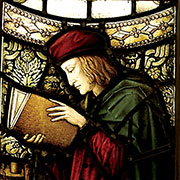 This exhibition celebrates the legacy of Aldus Manutius (1449 – 1515), an Italian humanist scholar who founded the Aldine Press at Venice.

His publishing legacy includes scholarly editions of classical authors, the introduction of italic type, and the development of books in small formats that were read much like modern paperbacks. The firm was continued after his death by his son and grandson until 1598.

The John Rylands Library holds one of the largest collections of Aldine editions in the world. Many of these come from the Spencer library, purchased by Mrs Rylands in 1892.

There are also other stories of local collectors, such as Richard Copley Christie and David Lloyd Roberts, and how the citizens of 19th century Manchester looked to Italy, and Venice in particular, for inspiration.