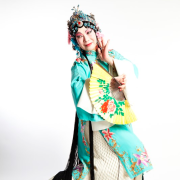 Kunqu (Kunqju) Opera is one of the oldest forms of Chinese opera. Originally evolved from the Kunshan Diao, one of five major melodies developed during the late Yuan Dynasty, it dominated Chinese theatre from the sixteenth to eighteenth centuries with its colourful, intricate costumes and dramatic storylines. In an effort to safeguard its future Unesco declared the art form a "masterpiece of intangible heritage", leading to a recent resurgence in its popularity and the emergence of a new generation of artists and performers.

Kathy Lee Hall, an experienced practitioner, teacher and founder of the London Jing Kun Opera Association, will unravel the mysteries of this ancient art form. This informal introduction will include a brief history followed by an explanation of the role types, the meaning behind the costume designs, the symbolism of the painted-faces and the music. Kathy will demonstrate the use of voice and movements with watersleeves, fans and other typical hand-props.

Kathy Lee Hall has studied the role of the guimendan (‘refined young lady’) under Wang Fengmei of the Zhejiang Kunju Opera Troupe. In 2008, an Arts Council England grant enabled her to study the role of the zhengdan (‘first lady’) with Liang Guyin of the Shanghai Kunju Opera Troupe. She has performed extensively as a virtuoso throughout the world, including at the Venice Biennale Theatre Carnival, and is regarded as a leading expert in the field.

The Confucius Institute public talks are free and open to all. There is no need to book, just come along on the day.