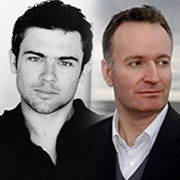 We apologise for any inconvenience caused. Ticket holders are asked to contact Quaytickets to obtain a refund or swap tickets for equal amount.

The Illuminations, Andrew O’Hagan’s fifth novel, is an epic story about a young soldier and his ground breaking grandmother that sweeps the reader from Scotland and Blackpool to Afghanistan. Named one of Granta’s Best Young British Novelists in 2003, Andrew has won the Losthe Los Angeles Times Book and the E.M. Forster Awards, and is Editor at Large of the London Review of Books.

Owen Sheers’ I Saw A Man is a gripping and elegant exploration of violence, guilt and redemption that The Times called ‘a rare and luscious treat for the reader’. Sheers is a poet, novelist and playwright whose debut novel, Resistance, was made into a film; his writing has won the Welsh Book of The Year and Somerset Maugham awards.

Hosted by John McAuliffe of The Centre for New Writing.