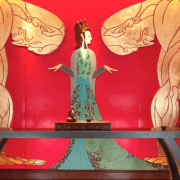 Join us for an evening of conversation and live music exploring Isaac Julien’s spectacular film installation Ten Thousand Waves, currently on display at the Whitworth.

A conversation between Whitworth Director Alistair Hudson and award-winning artist Isaac Julien CBE will be followed by a live performance by Jah Wobble and Chinese Dub Orchestra, one of the composers of the Ten Thousand Waves film score.

Latecomers are not guaranteed entry. Tickets are free and are available here: https://www.eventbrite.co.uk/e/thursday-lates-isaac-julien-ten-thousand-waves-tickets-46222210877

Rooted in the Morecambe Bay tragedy of 2004, in which 23 Chinese cockle-pickers drowned off the coast in northwest England, Ten Thousand Waves (2010) is a cinematic three-screen installation exploring contemporary experiences of desire, loss and separation.

Ten Thousand Waves is on show at the Whitworth until 28 August 2018 and has been purchased for the Whitworth’s collection with support through the Moving Image Fund for Museums, an Art Fund project conceived in partnership with and supported by Thomas Dane Gallery with the generous support of a number of private donors.

About Jah Wobble and the Chinese Dub Orchestra:

Acclaimed bassist/composer Jah Wobble began his musical career at 18 as a founder member of Public Image Limited. His heavy, hypnotic bass lines defined the post punk era and have influenced many musicians over the last 30 years. In 2008, accompanied by his wife Zi Lan Liao, Jah Wobble toured with a large group of Chinese performers and went on to release an album that documented that project called ‘Chinese Dub’ which won the Songlines magazine world Music award. Jah Wobble and the Chinese Dub Orchestra contributed music to Isaac Julien’s 2010 film Ten Thousand Waves, adapting tracks from the album alongside new compositions made in response to the film’s visuals. TBC by Jah Wobble