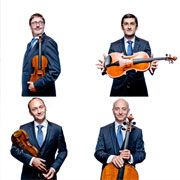 In the last years of Stalin’s regime, composers in Russia and the eastern bloc were exhorted to compose music ‘for the people’. In Poland Lutoslawski responded with a folklike series of piano pieces, which he later arranged for viola and cello, while in Russia the ailing Myaskovsky, once dubbed ‘the conscience of Soviet music’ composed his lyrical farewell to the quartet genre.