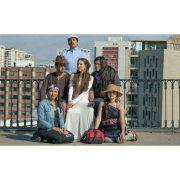 In the context of the Mapuche diaspora in Santiago (Chile), the collaborative project MapsUrbe: The invisible City involved young Mapuche artists and intellectuals engaging the city space through collective creative work, site-specific performance and critical cartography. At the intersection of Santiago's urban materiality and the immaterial practices and lived experiences of the project’s participants, the elaboration of decolonial epistemologies went through the exercise of thinking through the city and the bodies dwelling in it, crafting alternative spatialities and temporalities. Disarranging the linear unfolding of history, subterranean narratives emerged within the capital city, playing with unexpected connections and routings.

The paper elaborates on these staging of collective and individual experiences of indigeneity within the city - a given identity re-enacted in disruptive ways - exploring how the artistic gesture of 'performing the Mapuche city' challenges and redefines political and poetical horizons at the intersection of place, body and imagination. Moving from the concept of Mapurbe as a critical enunciation site, these performances are addressed as a way of producing meaning and knowledge through and beyond the situadeness of place, encompassing emplaced aesthetics, political imaginations and corporeal epistemologies.