Joy for Ever: How to use art to change the world and its price in the market 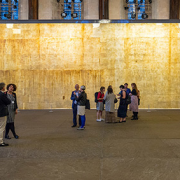 In 1857 John Ruskin (1819-1900) delivered one of his most important public lectures in response to the Great Art Treasures exhibition in Manchester, the largest art exhibition ever held in the UK. Titled The Political Economy of Art, or, A Joy Forever (and Its Price in the Market), Ruskin’s lecture berated the city that he believed was the epicentre of all ills in the world. He saw Manchester as the manifestation of the rampant free market capitalism, industrialisation and its dehumanising effects that engulfed the 19th century world. This lecture later became the seminal book Unto This Last (1860), his treatise on political economy, that inspired the founding text for the Labour Party and Ghandi’s post-colonial reform of India, amongst other things.

In 2019 Ruskin’s words seem as relevant now as they did then, in a climate of perceived ecological, political and social catastrophe. Ruskin was complex, difficult and flawed, as well as profound. He also hated Manchester, and it seems fitting that the city responds with equal complexity and irreverence.

The gallery space will host making workshops, talks and performances to encourage new debate, thinking and action on how better to live together today; it is a space for using not just observing. Part classroom, part gallery, this dynamic project aims to connect Ruskin’s radical critique to our contemporary moment, positioning him as a powerful speaker to our times.

Joy for Ever will kick start a new way of thinking that revisits the Whitworth’s origins as an Institute founded on civic purpose and the use of art in a mission of social change, whilst combining this with radical new approaches to the role of museums and art in the world today. This exhibition also marks the start of a two-year project with the Manchester Business School, which will culminate in the exhibition Economics: The Blockbuster in 2022.