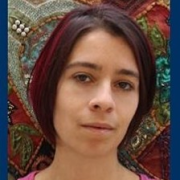 We're thrilled to be welcoming Rebecca Zahabi to the shop to launch her debut adult novel THE COLLARBOUND. Rebecca will be in conversation with Jeanette Winterson.

On the other side of the Shadowpass, rebellion is brewing and refugees have begun to trickle into the city at the edge of the world. Looming high on the cliff is The Nest, a fortress full of mages who offer protection, but also embody everything the rebellion is fighting against: a strict hierarchy based on magic abilities.

When Isha arrives as a refugee, she attempts to fit in amongst the other mages, but her Kher tattoo brands her as an outcast. She can't remember her past or why she has the tattoo. All she knows is that she survived. She doesn't intend to give up now.

Tatters, who wears the golden collar of a slave, knows that this rebellion is different from past skirmishes. He was once one of the rebels, and technically, they still own him. He plans to stay in the shadows, until Isha appears in his tavern. He's never seen a human with a tattoo, and the markings look eerily familiar . . .

As the rebellion carves a path of destruction towards the city, an unlikely friendship forms between a man trying to escape his past and a woman trying to uncover hers, until their secrets threaten to tear them apart.

The Collarbound hooks from the opening page and will appeal to fans of magical, brink-of-war settings, like that of The Poppy War and The City of Brass.

Rebecca Zahabi is a mixed-heritage writer (a third British, a third French and a third Iranian, if the mix is of interest to you). She started writing in her home village in France at age 12 - a massive epic which set out to revolutionise feminism. Since then, she has slightly re-jigged her expectations of what she can achieve with a keyboard and a blank page. After honing her craft in a variety of genres - playwriting, short stories, interactive novels - she hopes to write books that can make a difference. Her first YA book was shortlisted for the Northern Writers' Award in 2019. Her adult debut, The Collarbound, was longlisted for The Future Bookshelf program at Hachette UK before being acquired by Gollancz.