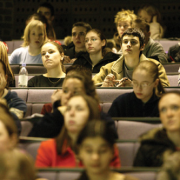 Studying 'English' at Manchester covers much more than is often thought! Reading ‘English’ here involves looking at the texts and histories of our culture right from Chaucer and Shakespeare to Hip Hop and Hollywood.

A vast amount thought-provoking and exciting subjects that can be explored at university come under the heading of English. They include: English Literature, English Language, Drama, Anglo-Saxon History, Linguistics and American Studies. Different periods are studied, including Victorian literature, 18th Century and post-war texts, and include a range of media, including books, poems, drama, film, and even music and TV.

Degree courses can also include a combination of subjects including a range of European, Middle Eastern and Asian languages. This Discover English day will give you a taste of the range of opportunities available within the study of English as well as the diverse range of potential career opportunities that this degree will open up to you.

This day has a broad appeal to students with an interest in English Literature, English Language and Linguistics, and the history, technique and theory of these subject areas. Alongside English sessions, students will also have an opportunity to find out more about Drama and Film Studies the University; and the role of English in the study of education; and how English can also be studied alongside History and other Languages.

Throughout the day, visiting students will see how degrees in English and associated subjects create graduates with highly developed language and communication skills; a greater capacity for both team-working and independent working; and exceptional critical and analytical skills. Any student interested in communication, presentation, the power of language, and the relationship of English and Drama studies to global history, politics and business, and the arts, will be sure to enjoy and be enthused by this day.