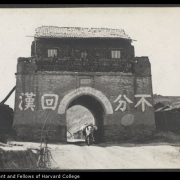 The Ma Family Muslim leaders who dominated northwestern Chinese politics through the early Republican era have unenviable reputations: classed as 'warlords', they are most often described as conservative strongmen, opposed to all things modern and determined to hold onto power for them and theirs at all costs. This paper joins recent revisionist scholarship in rejecting the warlord paradigm to argue that the northwestern Ma families were sophisticated political actors who adopted a range of strategies to reform their local communities and safeguard Islam.

Connected to the Beiyang government through a shared military culture, Ma leaders such as Ma Anliang and Ma Fuxiang strived to ensure political participation for Muslims in the new Republic. However, their efforts were complicated by the legacies of Qing minoritisation of Chinese Muslims and enduring concerns about the nature of Islam in China.

Biography: Dr Theaker is a Visiting Fellow at the University of Oxford China Centre. She holds an MA in Chinese and History from the University of Edinburgh, and an MSt and DPhil in Oriental Studies from the University of Oxford, where she was a Clarendon Scholar. Her research explores the history of late imperial China, focusing on social and religious transformation in Chinese Muslim communities following the Great Northwestern Muslim Rebellion, 1862-1874. Her work explores the ideology behind mass population resettlements in Shaanxi and Gansu in the wake of the rebellion and the socio-economic, religious and political transformations produced by the resettlements and postbellum reconstruction. Broadly, she is interested in comparative colonialisms, processes of minoritization, Chinese Islamic modernities, Sufism in China, Sino-Tibetan borderlands and histories of migration.