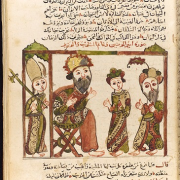 The John Rylands Institute is honoured to welcome Marina Warner to deliver the Institute’s Annual Lecture on Thursday, 11 February 2016.

A writer of fiction, criticism and history, she has published novels and short stories as well as studies of art, myths, symbols and fairy tales. Earlier writings explore female symbols and mythic figure, such as the Virgin Mary and Joan of Arc; more recently she has concentrated on fairy tales, including the Arabian Nights. In her fiction, such as The Leto Bundle and Fly Away Home, a recent collection of short stories, she is also inspired by traditional stories, folklore and myth, and attempts to translate them into contemporary significance - to re-vision them.

She is Professor of English and Creative Writing at Birkbeck College, London. In 2015, Marina was awarded The Holberg Prize, and made DBE. She is a Fellow of the British Academy, President of the British Comparative Literature Association (BCLA),and has been given Honorary Doctorates at several universities. Her book, Stranger Magic: Charmed States & the Arabian Nights won the Sheikh Zayed Book Award, the Truman Capote Award for Literary Criticism and the National Book Critics Circle Award for Criticism.

The Institute is delighted that Professor Warner will be sharing her knowledge and expertise with our audience, presenting a lecture entitled Oracular Narrative: Timing and Truth Telling, in which she will explore mythic forms of prefigurement and prophecy in contemporary fiction inspired by Greek tragedy and the Arabian Nights.