Politics Pankhurst Seminar with Professor Francesca Gains: Metro Mayors: Who are They and What do They Do? - A Pre-Election Primer 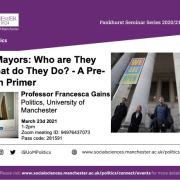 Metro Mayors: Who are They and What do They Do? - A Pre-Election Primer

Abstract May the 6th is election day and almost 40% of English voters in many parts of England will have the chance to elect a metro mayor. It’s been four years since the first three metro mayors were elected including Andy Burnham in Greater Manchester. Since then the roll out of English devolution continued apace and after the 2019 general election more devolution of powers looked likely as part of the levelling up agenda. However the events of the past year have placed a strain on relationships between metro mayors and Whitehall and the contests this year include some political battlegrounds. This Pankhurst talk will look at who are metro mayors, what do they do and will ask what next for English devolution?

Politics Pankhurst Seminars are research talks aimed at our students in which members of staff in Politics talk about their own research in an informal and accessible way.