Dafydd Fell - How do Movement Parties Learn Lessons of Defeat in Taiwan? The Case of the Green Party Taiwan 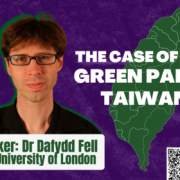 IN-PERSON: Electoral defeat is often viewed as the mother of party change. However, studies show that parties do not necessarily learn the right lessons of defeat. The way that parties react to electoral setbacks is often closely tied to the internal power structure and power struggles in the aftermath of the election. Parties also need to face the demands of competing goals, and the way they react to electoral defeat may be affected by whether the party prioritises goals such as winning votes or office, party ideals or representing members’ interests. While much of the literature on the way parties deal with electoral defeat relies on cases in European party systems, a number of studies have also been conducted on mainstream parties in Taiwan. In this paper, we have chosen to focus on the case of one of the oldest movement parties in Taiwan, the Green Party Taiwan. We examine how the party has dealt with electoral defeat and if it can be said to have learnt the right lessons of defeat. Since movement parties are generally seen as prioritising policy or ideological goals over electoral success, we are interested to see whether the Green Party’s responses to defeat differ from earlier studies of Taiwan’s mainstream parties.

We address these questions by looking at the party’s response to three national election campaigns in 2012, 2016 and 2020. In order to operationalise the way the party reacted to the electoral setbacks, we look at the following indicators of post-election change: (1) leadership change, (2) internal balance of power, (3) organizational change, (4) change in the alliance strategies, (5) programmatic change. We plot how the party has changed on these indicators by examining the nature of the party in the next rounds of elections. This then allows us to make a judgement on whether the party had learnt the right or wrong lessons of defeat. The analysis relies on a series of interviews with Green Party Taiwan figures over the last ten years, party political communication material, as well as participant observation data.

Biography: Dr Dafydd Fell’s interest in Taiwanese politics began after a year as a language student in Taipei in the late 1980s. After graduating with a degree in Chinese Studies, he spent most of the 1990s working in Taiwan in the education, broadcasting, tourism, agricultural and sports management sectors. Being an eyewitness to Taiwan’s transition away from authoritarian rule has helped shape his subsequent research at SOAS University of London. He joined the SOAS Politics Department as a PhD student in 1999 and has been teaching there since 2003. Dr Fell's main research focus has been on Taiwan’s political parties and electoral politics.