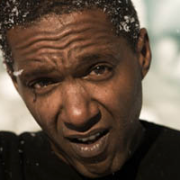 He didn’t know a black person until he was eighteen. It wasn’t his fault. They just thought it was better that way...

Playwright, performer and broadcaster Lemn Sissay – the child of an unlikely liaison between Wigan Social Services, Ethiopia and Eritrea – spent most of his adult life searching for his family. This extraordinary journey was the inspiration for his award-winning play Something Dark.

In this original follow-up, Lemn continues searching – not for family but for something more evasive: race. Fusing the lyrical and polemical, Why I Don’t Hate White People is a whirlwind tour of race as seen from one man’s unique and intensely personal perspective.

Exploring this contentious area with humour and originality, Lemn depicts some unexpected race-related situations, from an anti-slavery workshop where he chains up his students and leaves them in the classroom, to the launch of a new Richard Pryor Centre for Equality, which implodes at the opening ceremony. The result of Lemn’s journey into race is his discovery of the many reasons why he doesn’t, in fact, hate white people.

POST SHOW CHAT BACK: Thu 18 March 2010 immediately after the performance.

Lemn Sissay is artist-in-residence at the Southbank Centre. His work includes publications Tender Fingers in a Clenched Fist, Rebel Without Applause and the recently released Listener. His include plays Chaos By Design, Storm, and Something Dark.

Lemn has recently returned from an expedition to the Antarctic with the charityCape Farewell to experience the effects of climate change in the region. Artistically and emotionally moved by the experience, Lemn has fed some of the creative ideas inspired by the trip into Why I Don’t Hate White People.

Director John E. McGrath was recently appointed as the inaugural director of the new National Theatre of Wales and was previously the Artistic Director and Chief Executive of the multi-award winning Contact, which has established an international reputation for exciting new work, young diverse audiences, and international collaboration.

Co-produced by Artsadmin & the Lyric Hammersmith with support from the Stir It Up Consortium.