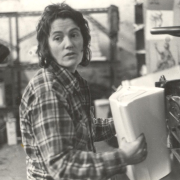 Join us for a screening of the film Invisible Women.

Angela Cooper and Luchia Fitzgerald have spent the last half a century fighting for their rights as women and as lesbians.

Their work has revolutionised Manchester whilst transforming the lives of thousands of women and yet no record of them exists in the city’s archives; theirs is a story that risked disappearing from history. Until now.

Manchester, 1969: Luchia, a teenage Lesbian runaway from Ireland struggles to survive on the streets of Manchester. She’s arrested and sent for a lobotomy to cure her of her “deviant sexual tendencies”. Luchia escapes the lobotomy to seek solace in the New Union, a pub at the epicentre of Manchester’s underground gay community.

Luchia is at her lowest ebb when she hears a female student at the next table giving voice to every frustration she felt; Luchia pulls up a chair to listen. That student was Angela and this chance encounter sparked a relationship that has endured fifty years of euphoric highs and earth-shattering lows.

Whilst the film is ostensibly about Angela and Luchia's personal and political journey we are using their relationship to explore Manchester and, in particular, the forgotten and, up until now, untold story of the North West’s LGBTQ past through a working class lens of rebellion and activism which is still alive today: Angela and Luchia are still very much fighting for their rights and the rights of LGBTQ people in Manchester.

Book tickets for this free event at eventbrite! https://www.eventbrite.com/e/invisible-women-tickets-68769556595