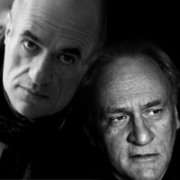 Like Colm Tóibín, Paul Durcan is one of Ireland’s foremost writers and is renowned as both an outspoken critic of his native country, and as a chronicler of its emergence from the repressions of the 1950s to the contradictions of the present day. His first book, Endsville (1967), has been followed by more than twenty others.

In 2001 Paul Durcan received a Cholmondeley Award. He was the Ireland Professor of Poetry 2004-2007. In 2009 he was conferred with an honorary degree by Trinity College, Dublin.

Paul Durcan’s 22nd collection of poetry, Praise In Which I Live And Move And Have My Being will be published in April 2012 by Harvill Secker.

Please note that this event takes place at The Anthony Burgess Foundation. For further information about the venue please visit: www.anthonyburgess.org