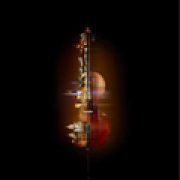 The University of Manchester’s Contemporary Ensemble in Residence Psappha is Manchester’s pre-eminent new music ensemble specialising in the performance of music by living composers www.psappha.com

Disconnected statements presented in an obsessive search for truth. What is the sound of dark matter? The people of Kimerii were fabled as dwelling in perpetual night...

This event forms part of the New Music North West Festival, the fourth and largest ever festival celebrating the wealth of creative talent in the North West.