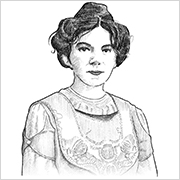 The 2018 Pankhurst Lecture will be delivered by

We are delighted to welcome Brenda Marjorie Hale, Lady Hale of Richmond and President of the Supreme Court, back to the University where she taught law from 1966 to 1984.

In January 2004, she became the United Kingdom’s first woman Lord of Appeal in Ordinary after a varied career as an academic lawyer, law reformer, and judge.

In 1984 she was the first woman to be appointed to the Law Commission, a statutory body which promotes the reform of the law. Important legislation resulting from the work of her team at the Commission includes the Children Act 1989, the Family Law Act 1996, and the Mental Capacity Act 2005. She also began sitting as an assistant recorder.

In 1994 she became a High Court judge, the first to have made her career as an academic and public servant rather than a practising barrister. In 1999 she was the second woman to be promoted to the Court of Appeal, before becoming the first woman Law Lord.

Christabel Pankhurst was a suffragette and leading figure in the Women's Social and Political Union. She obtained a First Class degree in Law from The University of Manchester, but, as a woman, was unable to practise as a barrister.

The School of Law founded the Pankhurst Lecture to commemorate Christabel Pankhurst’s achievements, to celebrate the achievements that have been made in women’s rights and to highlight the work still to be done.

The lecture will be followed by a reception in the foyer of University Place, to which all attendees are invited.

Please register via the Eventbrite link on the right