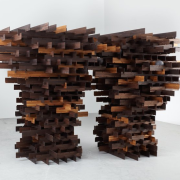 Turner Prize nominee and Royal Academician Alison Wilding presents works spanning the past 20 years of her career. This new show at the Whitworth will comprise of three major sculptures, including one, Disposition, from her 1998 series of 16 scenes from The Passion of Christ, gifted to the Arts Council Collection in 2006.

Additionally the exhibition will present for the first time In a Dark Wood, a sculpture created in 2012 but never previously shown and Largo, 2002. She will also creat a new iteration of recent work, Reversing, 2017, a hand-printed wallpaper that reworks William Morris’Acanthus motif asymmetrically, fixing it visually and physically to the wall with a sharp-edged brass sculpture. Alison Wilding studied at Nottingham College of Art from 1967 to 1968, Ravensbourne College of Art and Design, Bromley, Kent from 1968 to 1971 and subsequently at the Royal College of Art, London from 1971 to 1973. She was nominated for the Turner Prize in 1992 and received a Henry Moore Fellowship for The British School at Rome in 1998.