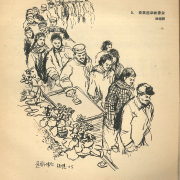 Webinar: In the years between 1958 and 1962, the Urban Commune movement was promoted as a radical effort to change the daily lives of Chinese city residents, including their relationship to work, eating, care of the self and of the family. It was especially aimed at completely altering the conditions of women (urban “housewives”): by freeing them from the drudgery of cooking, cleaning, and childcare and inserting them into the “truly productive” life of factory work, the movement aimed at achieving a new form of everyday, based on a true equality of gender relationships, accomplished through the shared creativity of manual labour. But early reports of success (down to the elimination of gossip and renewed spousal bliss) eventually gave way to more grim assessments of continuing exploitation, factory alienation, and persistent inequality.

Biography: Fabio is a cultural historian of twentieth-century China, with a particular focus on political activism and urban space. He teaches introductory classes on Modern China and Modern East Asia as well as a course on Communist China through films, memoirs, and fictional narratives.