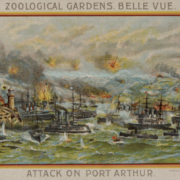 Three nights a week during the summer, for over one hundred years, the skies above Belle Vue Zoological Gardens in Gorton, Manchester, exploded with spectacular pyrotechnics. They accompanied dramas set against the backdrop of massive paintings, 300 foot wide and 60 foot high, depicting foreign cultures and imperial victories, watched by thousands. In this way, during the 19th and early 20th centuries, local perceptions of China were shaped by Belle Vue Zoo’s pyrodramas. The re-enactments of battles and the destruction of the Summer Palace celebrated British imperialism – hardly surprising in the context of the time – as well as an absorption of Western stereotypes and depictions of China and its people. For Mancunian audiences with little cultural or historical understanding of Asia in general, they offered a way of visually engaging with the ‘idea’ of China and its customs. This gave them a framework in which they could make ‘sense’ of China. By investigating these pyrodramas as part of my research, I will highlight their importance as one of the many ways that Victorian drama in Manchester engaged with China and the Chinese. This will be done through an examination of a selection of Chinese themed pyrodramas spanning seventy years.

Biography: Tracey May Boyce is currently a PhD candidate in History at Manchester Metropolitan University. Her PhD is entitled "Panoramas, Pyrodramas, and Pantomimes: Visualising Nineteenth Century Imperialism in Manchester". Her forthcoming article “Seeing is Deceiving”: The Lost Manchester Diorama, 1825-1827, will be published by the Manchester Region History Review in 2022. Her research on Belle Vue Pyrodrama and its links to China undertaken for the Manchester Museum (published as a blog), will be included in the new Lee Kai Hung Chinese Culture Gallery opening in the Museum in 2022.